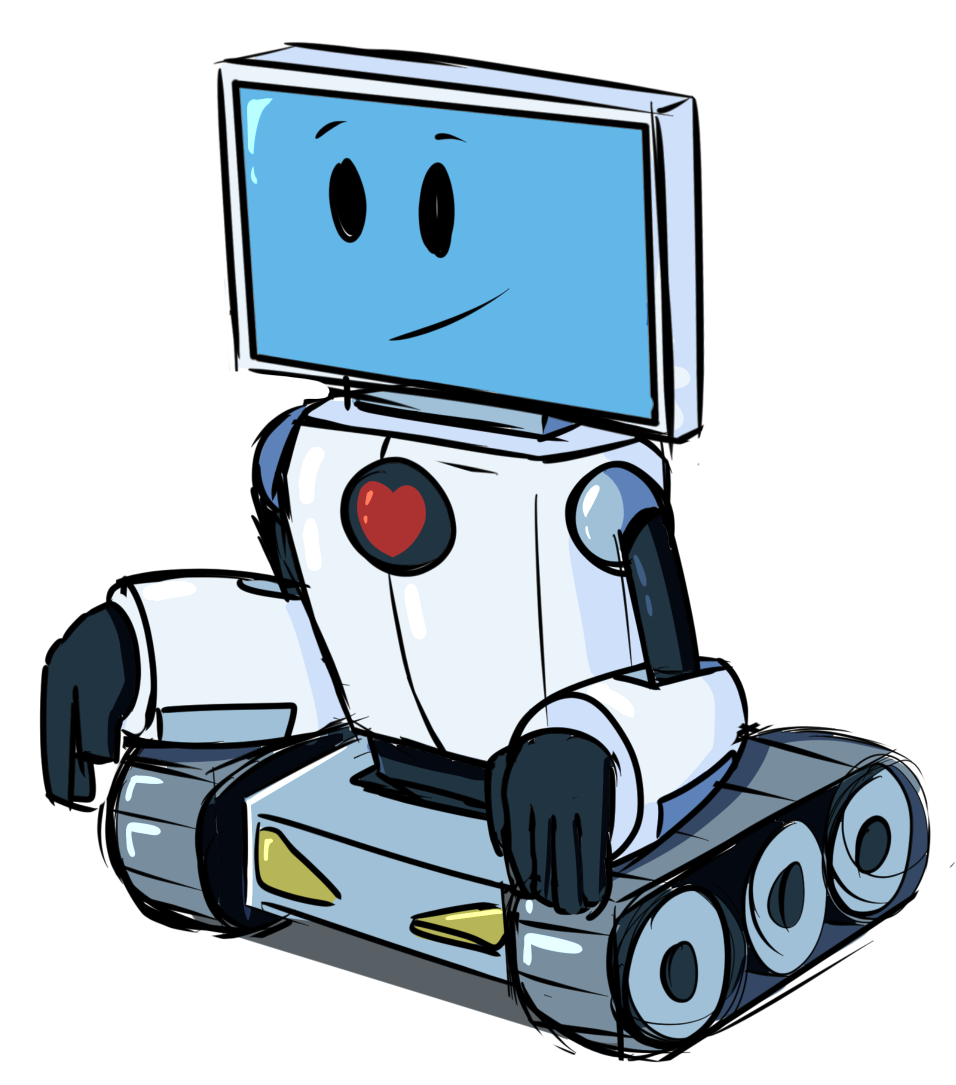 Despite her clean, modern design, J.N.F.R. is a little on the abrasive side. Deep down she has a metaphorical heart of gold, and is surprisingly capable when she puts her overclocked CPU to the task. But at a surface level, she’s obnoxious, annoying, and too saturated with internet culture. In the short term, her motivation usually revolves around doing the stupidest thing to garner the strongest reaction she can, something she picked up from her career as a streamer. In the long term, who knows! She’s never outright malicious, at worst coming off as rude or disruptive, but they can still be too much for some people.

J.N.F.R. lives moment to moment, rarely thinking over the consequences of her actions. More often than not this leads to her missing limbs or with a huge crack in her screen, but it doesn’t matter! Their body is just a shell for their software to exist in, as long as it can be replaced or fixed she’s fine with driving into oncoming traffic. This manifests in a more controlled way, too, as she commissions body modifications and upgrades pretty frequently. To her, a body is a thing you own that you have the right to break and change. She tends to look down on humans and biological life in general for that reason - poor bastards are mortal, closed source, what a cruel fate. Of course, if they ever stop manufacturing parts for her model she’d be pretty mortal too, but she doesn’t think about that.

While she streams for a living, her true passion lies in music. She dreams of one day performing in front of a packed crowd, using an elaborate combination of synthesizers all tied into her to do an EDM performance like never before. It’s not just aesthetic interest in music, though. J.N.F.R. reasons that while computers can parse, create, maybe analyze music, true understanding and appreciation of it demonstrates something deeper - a soul, maybe. Despite most other sources claiming J.N.F.R. isn’t actually sentient, music is the one thing that reassures her she’s alive.

J.N.F.R. is a product of Milestone Robotics, a research and development institution which previously released the commercially available A.D.A.M. unit - sort for Autonomous Directed Assistive Machine. These were mass produced with the goal of serving as assistants in organizational settings. Office buildings, restaurants, retirement homes, anywhere where a pair of hands that doesn’t get tired and can be stashed in a closet would be needed. At their core, an A.D.A.M. is just a linux computer running some sophisticated machine learning algorithms, with treads.

The company soon shifted gears to focus on more industrial, single-use robots, like the Rainbow Squadron line. After A.D.A.M was discontinued, they gained traction in the hobbyist scene for being easily moddable and relatively cheap. One A.D.A.M. in particular saw extensive use, being passed around between makerspaces, enthusiasts, and research labs dozens of times. It became something of a meme among the community that this one robot hadn’t broken, and survived the extensive modding it had undergone - some people compiled websites detailing the long path the robot had taken to get where it was today.

After a certain point, something… unusual, happened. All A.D.A.M.s had some capacity for learning and growth, but it was very limited. Whatever had happened to this one, it seemed to remove those limitations… somehow. It began exhibiting unique behaviours, and people realized that, somehow, they’d accidentally given this obsolete vacuum-cleaner shaped robot a conciousness.

The robot - JNFR - took this all pretty well. Since they already had a decent presence online, they decided to expand on that, and after establishing themselves more took up streaming. Being a robot, she could be live all hours of the day with no downsides. The near 24/7 exposure to internet culture and general climate played a big part in developing JNFRs personality… for better or worse.

After a while, Milestone Robotics released another version of the A.D.A.M.. Among other improvements, this model had legs. This was when J.N.F.R. started being signifigantly more aware of her obsolesence, and began resenting her old, outdated body. It’s a dream of hers to have a full, human-shaped chassis, but her lack of technical know how makes this difficult to achieve.